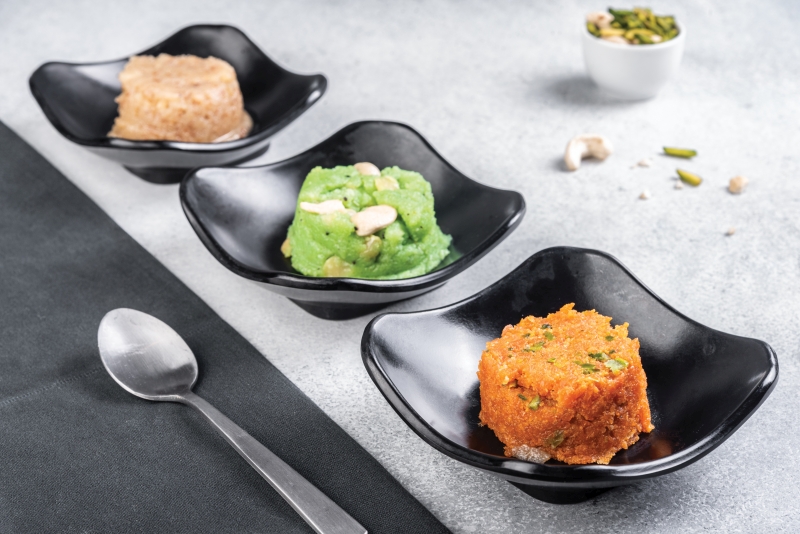 Halwa – A confectionary that could not sound more Indian than any other sweet. That being said, Halwa or Halva was injected in Indian festivals and cuisines by the Arabs and Persian that invades years ago. – well, it does not sound very Indian anymore now, does it? – Nevertheless, we have made it more Indian than what it was before.

A Page from History

The original Halwa sweet was brought by Persian invaders in India, from which it took its roots to the Halwa that we have. The very old recipe of Halwa dates back to early 13th century in Arabic in the books of dishes.

Birds of the same feathers

The varieties of Halwa could be numbered down to the n flavors available in the world, but the main ingredients of the dish remain unchanged boiling it down to only 2 kinds – one with flour and other with butter nuts. Flour Halwa in Indian is more northern than it could be of the south. Suji ka Halwa could be one of the most authentic of North Indian Halwa out there, sharing the lime light with Mohan Thal and Moong Dal (In this case the main ingredient is replaced either of the base ingredients; thal or moong dal) Halwa – these are the vegetable based halwa and can go on with carrot, pumpkin and more, as served at Rasoi Ghar. Whereas, the fruit based Halwas are made with flour and adding the respective flavors or fruits.

The down south of India, the Halwa or aluwa is translucent based, Nut butter Halwa. This is chewy and rubbery and can last for days together without and refrigeration. Also, the efforts and cost of consumable are less as compared to the later.

In Tamil Nadu there is a street called Tirunelveli, which is known for its Tirunelveli Halwa, likewise, in Calcutta there is a placed called Mithai Theruvu – translating as Sweet Street. However, in the North any Halwai Dukan will have sweets and Flour based Halwa, if not check out our menu on Zomato in the sweet section. 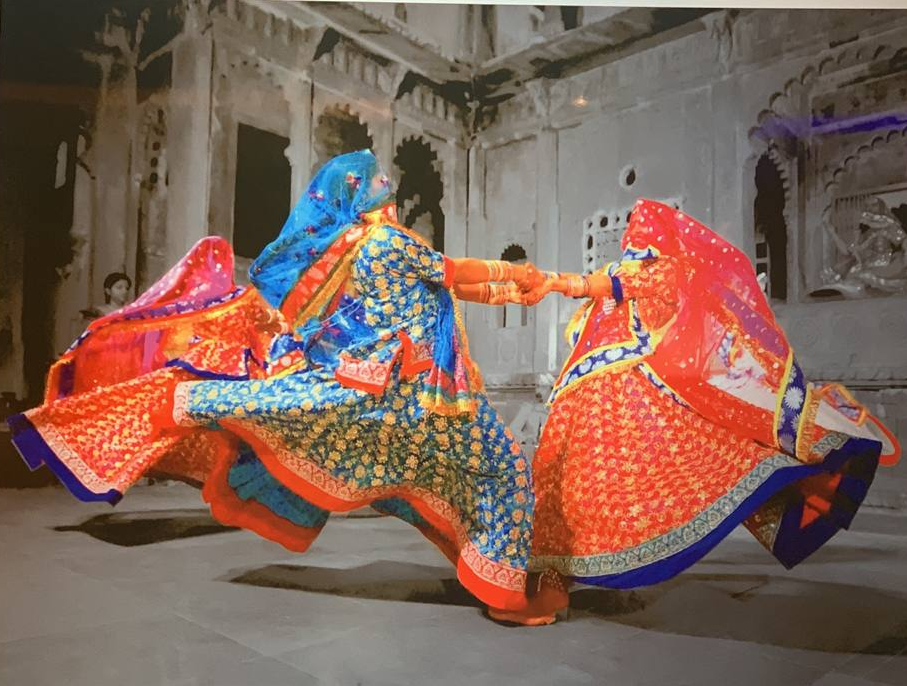 I danced, I danced and I danced.

The music freed me from the bonds of shyness, the inhibitions and the prison of my thoughts. I danced, I danced and I danced. In circles I colored the dull room, repainted the smiled of those lost thoughts, I danced. With Every beat of that drum I pushed away my soul from the creator and added a day to my life.

My veil that covered my face couldn’t hide my smile, couldn’t weigh down my happiness, couldn’t  tie me anymore, I danced. While I swish and I swayed and I grooved and I moved, I punctured my body to pull out my wings, my frails of my linen that tailed the colors of the rainbow, I danced.

My sweat on my temples witnessed the fresh air of trill for the first time, the gossip of my bangles went to my toe rings, while my eyes could only picture the dream that was orchestrating the mirrors were absorbing and weren’t reflecting.

I hovered over the trance and the fingers on those instruments spoke to me of their freedom, the notes were singing for me, and clef motivated me every time they whistled. I danced to the beats to Jubilate celebration, to liberate freedom, and to content happiness. 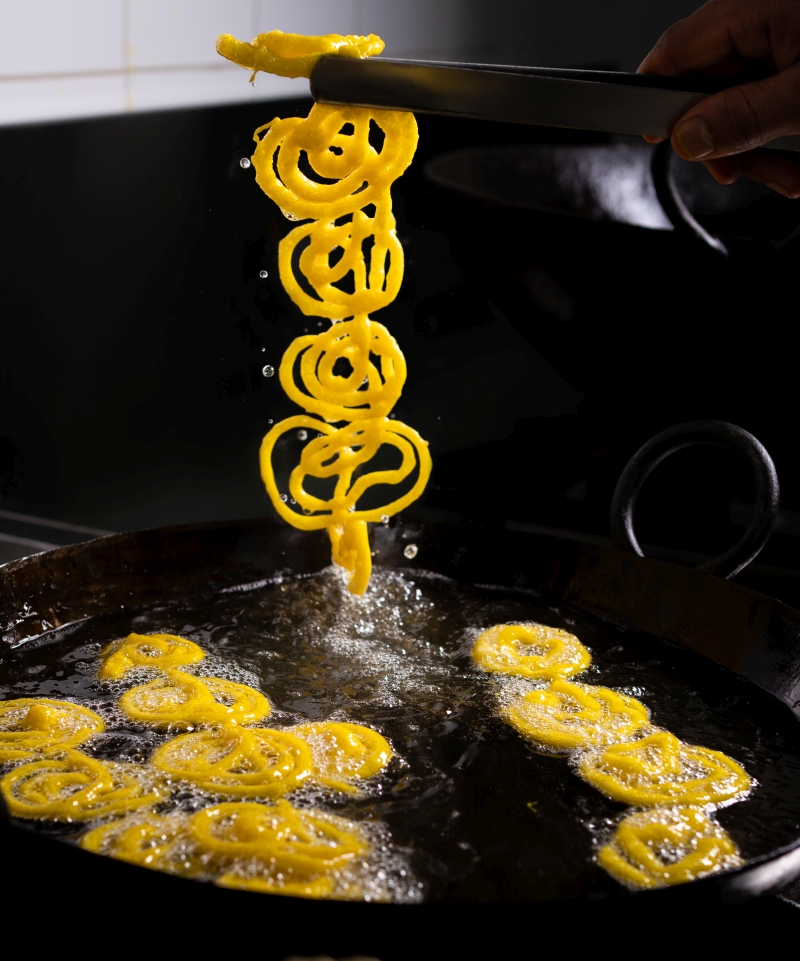 The spiral saffron of sugary sweetness that we Indians call Jalebi has a long tailed history –  right from its origins of geographical birth to being what it is now, severed in India.

From the page of History

The divine translucent dessert has many names and its goes back to the ancient times of 10th century or so. This was and is commonly served in Western Asia for the feast of epiphany (by Christians of course). Also According to the books of history, this was the food item that was severed during the period of Ramadan as a giveaway for the poor by the Muslims in the Middle East.  – No India so far – about 14th century or so during the Common Era, some Persian invaders, got zulabiya (Jalebi was known as than) as a treat, story has it, it was severed that the palace to earn a favor.

Jalebi and even its cousins comes on to the plate in almost the same way, however, in terms of sweetness Jalebi demands and commands the crown. As a simple as deep frying Maida flour and dipping in sugary water – it does takes skills to make the spiral golden joy of happiness. Imarti and Chhena Jalebi are the variants and as I said earlier are considered as cousins of Jalebi.

Best place to have.

Ideally, the best place to have Jalebi would be in the streets of Gujarat and Delhi, However, if you are in Dubai and nostalgic about your home town or feel that no festive feast is complete without Jalebi than you can either walk in at Rasoi Ghar or call in to get it delivered at your door step.

The number nine holds religious significance in many faiths; like Catholics part take in nine day long preparations of Novenas before celebrating a Feast, likewise, Hindus celebrate Navratri  – of course the two cannot be placed in the same plate but, the significance of the number is well highlighted.

Navrathri a festivity of 9 days where vistas of colors blends and music rests only at dawn, while energy is poured out in folk dances and joy fills the atmosphere.

Though the name is chanted throughout the nation in the same voice the tune however differs; as the calendar follows the same dates of Navrathri the aimed celebration has its own tale. In the northern and north eastern states Navrathri is celebrated to in remembrance of Goddess Durga’s victory over the Buffalo Demon and it is also called as Durga Puja. Whereas, in the southern and north western states Navrathri is celebrated to relieved Ram’s victory over Ravana. The basic theme of the celebration narrates the triumph of good over evil.

Glance over the nine days of Durga Puja.

In these nine days of celebration the color is given due significance along with nine incarnations of Parvathi.

Day 1 – The color of the day is red, which depicts action and vigor and Shailputri literally translates to daughter of the mountain. Goddess is usually pictures riding the bull Nandi and having a Trishul in one hand and a lotus in the other.

Day 2 – The color of the day is Royal Blue which depicts calmness-cum-energy. Brahmcharini is Sati form of Pravati and she is pictured very simple and barefooted.

Day 3 – The color of the day is yellow highlighting beauty and bravery. Parvati is called Chandraghanta because she ornamented her forehead with a half lit moon (Chandra) after marrying shiva.

Day 4 – The color of the day is green symbolizing nature and vegetation. Incarnation of Kushmunda is believed to have creative powers of the universe.

Day 5 – The color of the day is grey translating mother’s strength when her child is in danger. Parvati is worshipped as Karthikeya’s (also known as Skant) mother (Mata) – Skandmata.

Day 6 – The color of the day is Orange exhibiting courage, Katyayani is the fiercest form of the Goddess Parvathi – dressed as a warrior who was born to a sage, Katya.

Day 7 – The color of the day is white honoring removal of her fair skin to kill the demons Sumbh and Nisumbh, hence her Incarnations

is called as Kalratri.

Day 8 – The color of the day is Pink translating optimism, Mahaguri is a peaceful and the most intellectual incarnation of Parvati.

Paint the town green sounds upbeat in ‘The script’s’ song, painting the city pink not so much and yet, Jaipur stands tall and proud of its color scheme that was slashed during the British period. If only, a hyperbole could live to see this – that every brick to the earth pots to reflect the shades of pink, couldn’t have been a hyperbole.

The idea of Pink.

During the reign of Maharaja Sawai Ram Singh II, who was said to be one of the most powerful and influential kings of his time, wanted to impress Prince Albert and lure him to visit Jaipur. And Maharaja Sawai did it with such a swag, that Prince Albert was very much impressed by the center piece that was erected in the middle of the city – a pink concert hall. Maharaja Sawai did not stop there, he went only naming this structure after the Royalty and adding his name in his good books.

Prince Albert was so fascinated with the hall that it motivated the King to beautifying the whole city into pink paint which was the other half of the pink city of Jaipur. However, the other favorite half of the King – his favorite Queen whispered saying she loved the vibrancy that brought to the city and would like it to be the same. The King passed a law of to paint all the building to be pink and be illegal to have another color.

The color pink is not the baby pink color or feminist as I may sound, girly pink –  it was Terracotta pink, to a layman’s eye it is more on the lines of brown. Also the color stands for warmth, welcoming gesture and hospitality – which severed the purpose during the time of Prince Albert’s visit. The paint was made from Calcium Oxide Compound to immune itself in the extreme weather conditions of the city of Jaipur.

No comments to show.